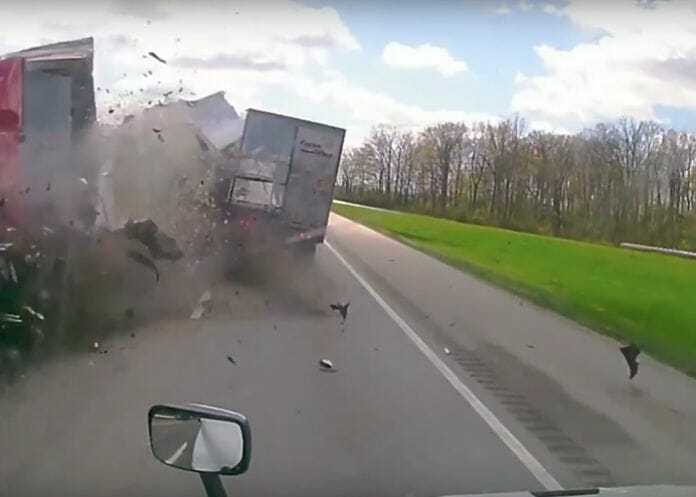 The trucking industry serves as an important part of the growing U.S. economy.  It is also a necessary part of many businesses’ supply systems.  In fact, more than 70% of all freight in the U.S. is transported by trucks.  However, recently there have been growing concerns about the number of crashes involving big trucks.  In recent years, the number of big truck crashes has increased.

Large trucks are defined by the Insurance Institute for Highway Safety as tractor trailers, single-unit trucks, or cargo vans having gross vehicle weight rating greater than 10,000 pounds.  The statistics in recent studies show that there are a large number of passenger vehicles involved in large truck cases.

Recent statistics show that large trucks are involved in a higher rate of crashes than passenger vehicles in the United States.  Although big trucks accounted for approximately 4% of all registered vehicles in the U.S. in 2008, 11% of vehicle deaths that same year were the result of large truck crashes.  Currently, the trucking industry is experiencing a shortage of truck drivers.  In 2017, the trucking industry reported a shortage of 50,000 drivers, which is the highest ever.  That figure is projected to triple in the next 10 years.  As there are fewer and fewer truck drivers, we can expect there to be more big truck crashes.

Crashes on the Increase

After a long decline in the number of truck accidents on the roadways, the numbers are once again back on the rise.  Fatal truck crashes peaked in 1979 at 7,000.  In 2009, those figures bottomed out at 3,600.  In 2017, the numbers showed an increase once again with approximately 4,761 fatal truck-related crashes.  From 2009 to 2017, there was a 40% increase in the number of annual truck accident related deaths.  Further, in 2017, there were an estimated 135,000 injuries resulting from big truck crashes.

When Crashes Cause the Most Injuries

Studies show that in a large truck crash, there is a greater likelihood of lower injury severity if the crash occurs near a curved section of the road or on a roadway sag.  Further, the number of horizontal curves and the number of interchanges per mile in the roadway also reduces the likelihood of injury crashes. However, the study also found that head-on collisions and crashes at intersections were the most serious, but crashes on highways were less severe.

Distracted driving, driving under the influence, or emotional distraction also tends to increase the likelihood of severe crashes while the fatigue of the truck driver and aggression don’t usually play a large role in the severity of a crash.

When a rear-end collision occurs between a tractor trailer and a car, factors such as darkness, high speed, being struck from the rear, and alcohol increase the chances of severe injuries.  In fact, dark conditions while driving are significant factors for increasing injury severity outcomes.  Also, driving in the summer months increases the occurrence of severe injury crashes.  However, driving in winter weather, on congested roadways, using child restraints, or being in a station wagon type vehicle help to less the severity of any injuries.  Lastly, increasing pavement friction decreases the likelihood of injury while snowfall increases the likelihood of more severe injuries.

Surprisingly, in a crash between a large truck and a passenger vehicle, males typically experienced less severe injuries than females.  Also, people between the ages of 55 and 65 were also more likely to be severely injured.

As the number of vehicles in a collision increases, the level of severity of injuries usually decreases.  Often, the reason for this is that cars involved in multiple vehicle crashes have preventive technologies in place which aid in lessening injury severity.

Whether the insurance company contacts you quickly or not, the faster you seek legal advice from a lawyer who knows truck accidents, the better.  With a tractor trailer crash, prompt investigation is critical to successfully recovering money damages in your case.  Because accidents involving tractor trailers are devastating, making sure that things like skid mark measurements and impact marks are preserved are often essential to a good recovery.  See our article on causes of truck accidents here.