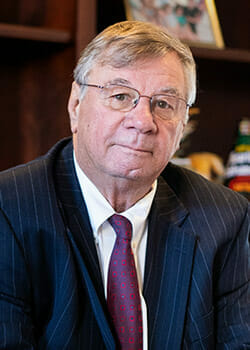 After graduating from college, Roger began his teaching career at Elkton Elementary School and Elkton High School in Rockingham County from 1969-1971. He also coached JV football during those years.

In 1971, Roger shifted his career focus to law. He attended the University of Maryland School of Law and received his law degree in 1975.

Roger began his law career as a sole practitioner in Harrisonburg in the general practice of law. His practice evolved into personal injury, employment and civil rights litigation. He has also been involved in First Amendment cases involving the right of free speech, age discrimination, discrimination based upon handicap and race. Roger’s concentration has evolved into specialized areas of the law, in particular serious personal injury cases involving wrongful death, auto/tractor trailer collision, and products liability.

Recently, Roger was invited to speak at the American Trial Lawyer’s Association’s 2006 Conference in Seattle, Washington, on the topic of Business Continuation and Planning Agreements.

In addition to Roger’s involvement in the legal community, he is also highly involved in the local community. He has served as a board member of the Association for Retarded Citizens (ARC) for many years and as treasurer of the organization as well. Recently, he was elected chairman of the Pro-Bono Committee of the Virginia Trial Lawyers Association.