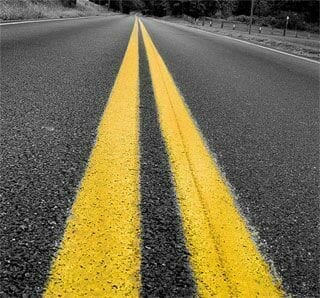 While most drivers understand pavement markings used on streets and highways, some combinations of lines and colors can be confusing.  But, when it comes to double solid yellow lines, let’s be clear, DO NOT CROSS A DOUBLE SOLID YELLOW LINE.  Let’s restate that:  Crossing a double solid yellow line is extremely dangerous!  The risks involved with such maneuvers are frequently not worth it.  Unfortunately, there have been numerous crashes recently which prove that point, such as a recent crash on Route 262 in Augusta County, Virginia.

Yellow lines mark a separation of traffic traveling in opposite directions.  They are also used on the left edge of divided roadways and one-way streets.  In both of these instances, motorists must drive to the right of the double solid yellow line.

In addition to accidents caused by drifting into oncoming traffic, some collisions that occur on two-lane roadways are caused by drivers who attempt to pass other vehicles in close proximity to oncoming traffic.  Sometimes the oncoming traffic might be beyond the passing driver’s sight distance when he or she starts the passing maneuver.  Even though Virginia law requires drivers to pay attention to the site distance necessary to pass safely, some drivers underestimate the sight distance needed.  Still other drivers choose to risk passing vehicles on double solid yellow lines even though obstacles block their vision.

In response to this, traffic engineers began making no-passing zones in areas where sight distances were inadequate to safely pass a vehicle which was traveling just below the maximum posted speed limit.  Factors such as weather conditions and driving at night may increase the sight distance you need to pass safely.

Consider the scenario of a driver planning to pass a vehicle on a two-lane double solid yellow line.  Typically, drivers take approximately 10 seconds to pass a car traveling 45 mph.  A 10 second pass at 45 mph covers close to 660 feet or 220 yards.  That is a significant amount of distance required to pass a vehicle, especially when there may be blind curves or other obstructions to a driver’s view.

Here is a good cheat sheet to help figure out speed and distance calculations:

So, if you are passing another vehicle traveling 65 miles per hour, it will take close to 953 feet (or more than 300 yards) to pass that vehicle.

The Virginia State Police has reported that on Saturday, August 30, 2020, a head-on crash occurred along Route 262 that left one dead.

According to the Virginia State Police, 43 year old Charlotte Gingerelli was hit head-on on Route 262 on Sunday morning when another driver crossed the center line and struck Gingerelli’s vehicle.

Drivers must be extra vigilant on two lane roads where speed limits exceed 40 mph to make certain that they stay in their lane of travel.  It is also important for drivers to be aware of the distances needed to pass other vehicles when traveling on two lane roads.  Too frequently, blind curves or other visual impediments make such passing unsafe and not worth the risk.  To be safe, don’t risk passing on a double solid yellow line and always maintain your lane positioning.