The Rising Numbers of Truck Accidents 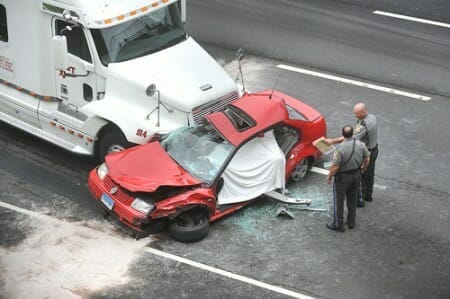 Why So Many Truck Accidents

Fatal truck accidents are far too common in the United States.  According to the Federal Motor Carrier Safety Administration, on average, a truck accident fatality occurs approximately 11 times every day. The result is a staggering 4,000 deaths each year due to truck and tractor trailer accidents.  And, this number just keeps rising . . . presenting our nation’s current problem of the rise of truck accidents.

Since 2009, tractor trailer crash fatalities have been on the rise.  As America’s growing economy means more good being shipped on our nation’s interstates and other roadways, more pressure is placed on trucking companies and their drivers.

In addition to the fatalities are the nearly 100,000 injuries that occur every year as a result of truck wrecks.  To get some perspective on this number, that’s equivalent to a commuter jet crashing every single week of the year and killing everyone on board.

Why No Public Outcry?

Usually, something which causes thousands of deaths and injuries would be met with public outcry.  But, in the United States, because trucking deaths and injuries are scattered in small numbers across the country, many times they don’t get covered in the national news.

There is also concern that spotlighting the large numbers of injuries and deaths will create public outrage and force the hands of business and government to do something to prevent the tragedies.  But, government and businesses are often reluctant to put too many restrictions in place that might hurt the country’s business opportunities. So, as a result, truck crash fatalities and injuries are the very high human cost of conducting business in America.  Read our article about big truck crashes and which crashes cause the most injuries here.

Keeping up with the growing demands for consumer goods as become job number 1 for many trucking companies.  The American Trucking Associations trade group indicates that there are around 30,000 unfilled truck driver jobs in the U.S.  The trade group expects freight tonnage to increase by almost 25% by 2025.  To keep up with this anticipated growth, the trucking industry estimates that it will need to hire almost 100,000 drivers each year for the next ten years.

Hiring that many drivers though is easier said than done.  Truck driving is a tough job requiring many long hours for somewhat low pay and lots of time away from family.  Drivers spend days and often weeks at a time on the road, working irregular hours.  These difficult conditions lead to extremely high turnover in the larger trucking companies, sometimes coming close to 94%.

As consumers demand more goods delivered to them at a faster and faster pace, trucking companies are forced to permit their drivers to drive more hours than allowed by law.  But say, just for the sake of argument, that there were enough truck drivers to meet the demand, reducing the number of driving hours allowed for safety purposes would only put more trucks on the road.  This also creates an increased risk.

The reasons behind the crashes vary from overly tired drivers to companies that don’t screen for problem drivers to a federal government that is slow to require new safety technologies to be installed in trucks.  Some also point the finger at the drivers of passenger vehicles who speed and weave in and out of the slower trucks.  Still others blame mechanical issues on the trucks, such as faulty brakes, as the culprit of many crashes.  So many possible causes make the jobs of the lawmakers who want to reduce the numbers of crashes incredibly difficult.

What Are the Answers?

On the topic of reform, the trucking industry has opposed certain safety rules such as requiring drivers to restart their work week by having two consecutive nights of sleep between the hours of 1 and 5 a.m.  But, the trucking industry argues that rules like that put more truck drivers on the roads during the morning rush hour, when there are more vehicles on the roads. This, once again, creates a greater risk in itself.

To get around the penalties that are often associated with disobeying federal safety regulations, trucking companies often change company names and corporate structures.  As a result, the federal government has had to launch a massive campaign to try to shut down carriers guilty of safety violations.  The Government Accountability Office has found that approximately 18% of these so-called “chameleon” carriers that change their names to avoid penalties are involved in severe accidents. compared to only 6% of “non-chameleon” carriers.

Technology That Could Save You From A Truck Wreck

The American Trucking Association estimates that only about 10 percent of all large trucks on the road have some kind of active safety technology. Some reasons that there are so few safety equipped trucks include concerns over cost and customer choice which slow the introduction and enforcement of rules that require trucks to be equipped with this technology.

To help contain the rise of deaths and injuries from truck accidents, truck manufacturers are racing to build safer trucks.  Volvo is working on developing radar that will detect cars ahead of the truck and brake if the truck gets too close to a vehicle in front.  Volvo also has technology that will alert the driver and readjust the vehicle when the truck has drifted out of its lane.

Mercedes Benz has also joined the list of trucking manufacturers trying to make trucks safer.  Mercedes is working on a fully autonomous truck which would need very little input from the driver.  Other technologies in the works include systems which alert fatigued drivers of lane drifting and steer the vehicle back to the appropriate lane.

Whether the insurance company contacts you quickly or not, the faster you seek legal advice from a lawyer who knows truck accidents, the better.  With a tractor trailer crash, prompt investigation is critical to successfully recovering money damages in your case.  Because accidents involving tractor trailers are devastating, making sure that things like skid mark measurements and impact marks are preserved are often essential to a good recovery.